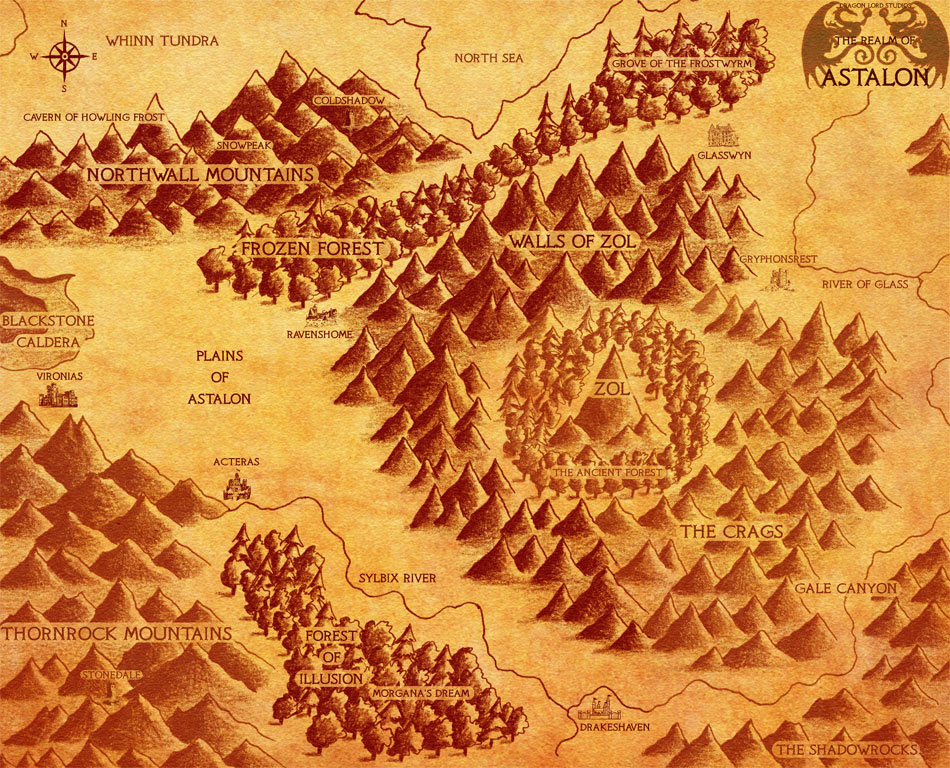 The realm of Astalon is at the center of the world of Elcriss.

It is here that one will find great plains, mountains, rivers and forests that support not only a rich diversity of creatures but also the highest concentration of people and the world’s most advanced civilizations.

The main geographic feature of the realm of Astalon is its great plains, the Plains of Astalon. These fertile lands make possible the food supply required to support the large population of people that live in this prosperous realm. Numerous farming villages and hamlets dot the landscape here, as do fertile fields of various types of crops.

Temperate zones on the plain range from downright hot in the south to quite cold in the north, where the huge barrier of peaks known as the Northwall Mountains tower over the great plains to the south. These mountains mark the change from a temperate to an arctic climate, and their frozen peaks are home to many ice-dwelling creatures. The last outpost of north Astalon, Coldshadow, is here.

The Northwall Mountains are treacherous, to say the least. Long ago during the Creation of Elcriss, an argument between the Ice God Shia and the Earth Goddess Tera ended when Tera thrust these gigantic mountains up from the depths of the earth to cut off Shia’s access to the southern Realms. Shia directed much of his power against the mountain wall, which left it frozen and inhospitable. To this day, icy storms and winds sweep through them on a constant basis, and attempting to navigate a way through them more often than not ends in disaster. One of the creatures that inhabits these mountains is a Dragon with a terrible temper, the Sleet Dragon Zephyron. He lairs in the Cavern of Howling Frost within one of the Northwall’s great peaks. In this region the blizzard winds scream through the mountains and passage is nearly impossible even while the Dragon slumbers. It is even worse when the creature stirs and wakes…

Another Dragon of the Northwall Mountains makes his lair on the huge mountain called Snowpeak. This is the Flood Dragon, Volos. This Dragon’s wrath manifests in the form of devastating avalanches and icefalls in the region of his lair. When he wakes it can be very bad news for the people the live on the plains of Astalon, as this Dragon’s emergence makes snow and ice melt extremely rapidly, causing huge floods and mudslides to flow out of the icy mountains down onto the plains in deluges that have at times been catastrophic.

Stretching from the foothills of the Northwall Mountains up towards the Glass Plains of the realm of Xuune is the Frozen Forest. This region of green and white is home to communities of Wolfen, and guarded by one of the most beautiful of all creatures, Kailash the Frost Dragon. The trees in and around the Grove of the Frostwyrm have been permanently coated with layers of shining crystal ice.

In the southern region of the realm lies the enigmatic Forest of Illusion. Here among the trees nothing is as it seems, and at the center of this strange place lies a grove known as Morgana’s Dream, where the Illusion Dragon Ilmayatar dwells. Many well-kept secrets are hidden within the confusing maze that makes up this forest, as well as incredible creatures from myth and legend that most people claim do not really exist.

Running along the northern edge of the Forest of Illusion and the southern edge of the great plains is the mighty Sylbix River, the longest and strongest river in the world. At its source in the foothills of the Thornrock Mountains lies the kingdom of Acteras. North of this city are the fortified walls of its sister-city, the kingdom of Vironias.

Across the plains, nestled between the silence of the Frozen Forest and the impenetrable Walls of Zol is the quiet, peaceful little city of Ravenshome.

Far to the east on the very edge of the realm of Astalon lies the shining city of Glasswyn, which was constructed with the vast resources of glass found on the bordering plains of the realm of Xuune.

The race of Men rules here in Astalon, though people from all races are readily found in all areas of this realm. The King rules from the south, from the world’s greatest city and center of power, Drakeshaven. This gargantuan city contains people from all over the world and is a beacon for trade and economic growth. Here there are found great libraries and universities filled with illuminated works of renowned historians and theologians. At the heart of Drakeshaven lies the glorious Palace of Dragons which pays homage to the creatures that rule the elements in form of giant statues of Dragons of countless types. The throne that the King of Astalon sits on is itself a magnificent work of art wrought of metal Dragon sculptures and Dragon scales, horns, and teeth.