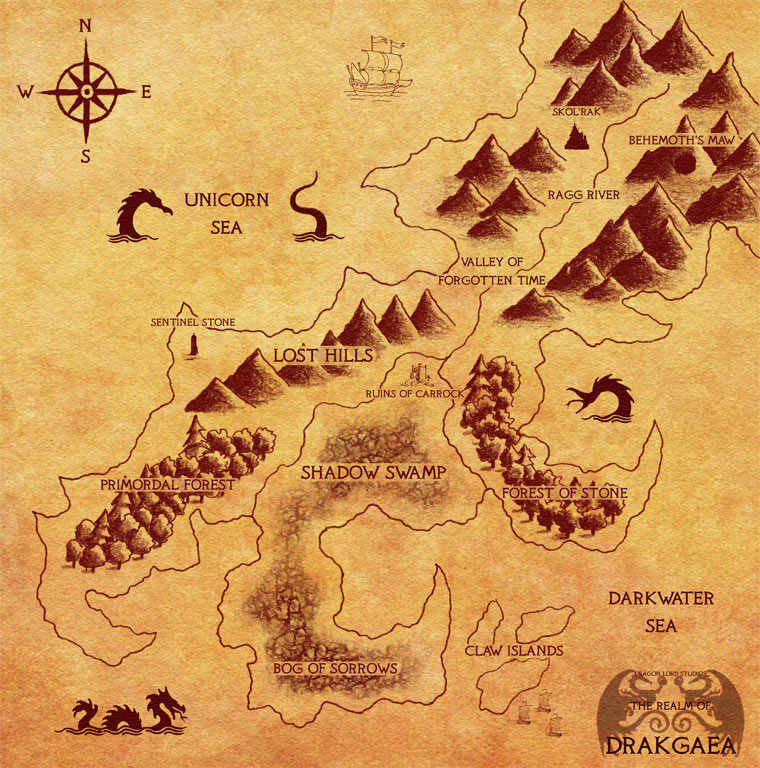 The realm of Drakgaea is one that time forgot.

Mainly sealed off from the rest of the world, the deep valleys and dark jungles and swamps hold a vast number of terrible creatures.

The main geographical feature of this region is the Valley of Forgotten Time. Here there are creatures that have survived from the dawning of the world, before there were people and before even the coming of the Dragons. Here in the valley there is a great cavern called the Behemoth’s Maw, which is the dwelling place of a truly terrifying creature. This is the Jungle Dragon Grygas, an enormous monster with an insatiable appetite for anything that moves. Thankfully the Dragon slumbers for long periods of time between feeding frenzies, but even during these times there are still other monstrous predators and huge beasts prowling the primitive jungles and swamps.

To the southwest lie the Lost Hills where many primitive Men live, as well as the Primordial Forest which houses nightmarish creatures of unknown origin, and the Forest of Stone in the southeast which is comprised of trees that are turned entirely to petrified wood.

In the center of the realm the Shadow Swamp begins, a nigh-impassible quagmire that houses still more terrible creatures. The worst among these is the great venomous Swamp Dragon Moramarth that makes his lair not only in the Bog of Sorrows but oftentimes in the Ruins of Carrock that lie on a high place where the Ragg River forks into its southerly and northerly flows toward the sea.

The only advanced civilization in this inhospitable place is found within the citadel-kingdom of Skol’Rak, the dwelling place of a race of brutal, heavily-scaled Drakkhan. The sprawling complex delves deep beneath the earth and rises high into the sky. This place is fortified against not only the creatures of the jungle but also against any armies that seek to end the menace that frequently comes out of the valley and spills out into other realms.

The Darkwater Sea features prominently into the realm of Drakgaea. The waters of this sea are, as the name implies, as black as pitch and deep, yet quite warm. Here there are sea serpents and monsters unlike anything known in the rest of the world. Sailing these seas is treacherous, but there are those that will brave them for the utter lawlessness that rules there. Many bands of pirates roam this dark sea, from strongholds in the Claw Islands as well as along the shores of Drakgaea itself. Even so, populations of Mordkin live beneath the dark waves, and thrive in the deep warm waters of this dangerous Sea.

On the northern shore of this realm stands a large, solitary monolith known as the Sentinel Stone. It is emblazoned with ancient runes and holds a secret guarded from some long-forgotten time. It is primarily used in the present as a way marker for ships in the Unicorn Sea, though what would happen if the ancient magic trapped within it is released is anybody’s guess…