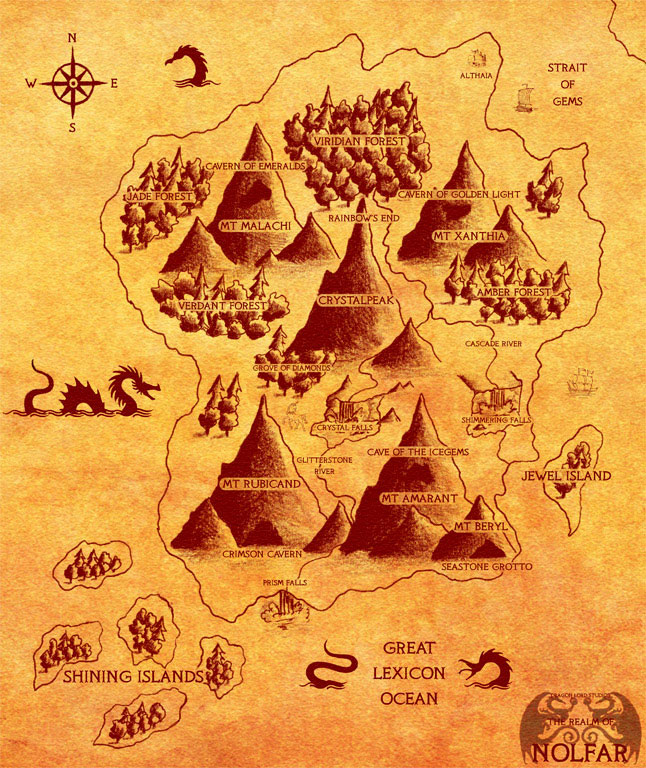 The realm of Nolfar is a shimmering paradise of rainforests and cascading waterfalls.

The mountains here overflow with precious, glittering gemstones and the creatures that live within it possess breathtaking, magnificent beauty.

The realm is dominated by six giant peaks, one of which has three quarters of its height submerged in the ocean. These mountains are as follows:

Crystalpeak, at the center of the realm, is home to the magnificent Crystal Dragon Ziazan at its zenith, the Rainbow’s End.

Mt. Malachi, to the northwest, is surrounded on three sides by the Viridian Forest, the Verdant Forest, and the Jade Forest. Within it lies the Cavern of Emeralds in which the Emerald Dragon Zelenka dwells.

Mt. Xanthia is in the northeast, and within the Cavern of Golden Light lairs the Topaz Dragon Vespyr.

Mt. Rubicand rises from the southwest, and within its Crimson Cavern dwells the Ruby Dragon Malaketh.

Mt Amarant is in the southeast, and within this cold mountain is the Cave of the Icegems, which houses the Amethyst Dragon Talos.

Immediately south of Mt. Amarant is Mt. Beryl. This blue mountain rises up from the Great Lexicon Ocean and features a deep complex of watery caves, the Seastone Grotto. Within these caverns dwells the beautiful Sapphire Dragon, Safira.

The realm of Nolfar is blessed with a myriad of sparkling rivers, streams, waterfalls and lakes. This includes the marvelous Glitterstone River, whose bed is encrusted with shining jewels. It runs from it source in the Viridian Forest and spills down a series of rock shelves, the highest being Crystal Falls which descends into a pool of sparkling diamonds and other gemstones.

The Cascade River splits off of the Glitterstone near Mt. Xanthia, and it descends also into its own awe striking Shimmering Falls.

As the Glitterstone River enters the sea, it falls from a mighty cliff face in a dazzling display of beauty in the Prism Falls, aptly named for the eternal rainbows that spring forth from the spectacular falls. The water then flows off toward the Shining Islands which host a colorful array of unique and wonderful creatures in the rainforests that grow upon them.

Nolfar supports a vast number of amazing creatures from myth and legend that do not live in the world of Men. Unicorns thrive in the Grove of Diamonds and Centaurs rule in the Amber Forest.

The only civilization that exists in the realm is that of Althaia – here there are the remnants of an ancient race of Sylvaan caretakers that live in great marble structures and worship still in the old ways. There are those who say that these people are the last remaining descendents of the Ancients, and so being they hold secrets and powers long since lost to the world. But these people are secretive and solitary, and have shut themselves away from the rest of the present day world.

Sailors and adventurers tell fabulous stories of the untouched wealth that lies within the realm of Nolfar. It is extremely difficult to sail the ocean to its shores, and once there the wealth that exists is guarded fiercely by the guardians that live in this place, which is why there are no established kingdoms here.