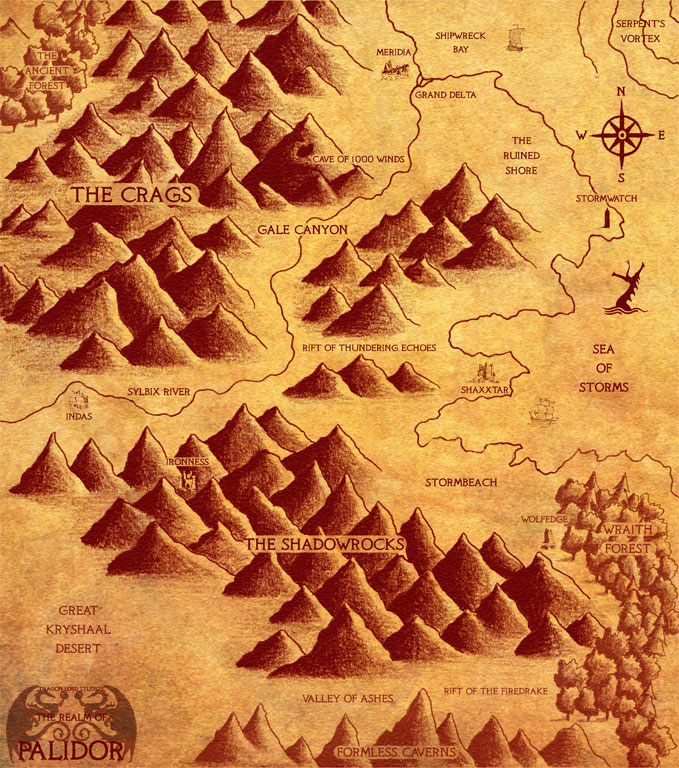 The land of Palidor is one of ominous crags, deep canyons with tall vertical walls and extremely high winds that sweep in from the Sea of Storms.

The realm is divided by the vast expanse of Gale Canyon, a natural wind tunnel with walls over a mile high. In places the canyon is several miles wide. The canyon itself is the divide between The Crags in the north and The Shadowrocks in the south.

At the bottom runs the mighty Sylbix River, which winds its way unceasingly to the Sea of Storms.

Near the northeastern edge of the canyon in the Crags is a high wall with a complex series of caverns carved into it many thousands of feet up. The largest of these is the Cave of 1000 Winds, which houses the slumbering spirit of the Air Goddess Aeon and is the lair of the great Wind Dragon Kalamir. This Dragon frequently rides the gale winds through the red and orange canyon on his enormous blue wings, and is often spotted as far west as to be viewed soaring above the canyon city of Indas.

South of these caves is a divide in the southern wall of the eastern Crags that opens into a yawning chasm so deep that one cannot see the bottom. This is the Rift of Thundering Echoes, and in it dwells the mighty Sonic Dragon Sonora.

The eastern shore of Palidor is under constant bombardment by high surf and wind generated by the Sea of Storms. Here the beaches are broken and twisted, so that on The Ruined Shore and Stormbeach very little can be found in the way of plants or creatures, just miles upon miles of broken red and gray rocks and fine, tan sand. However, there is a fortress on the stormy shore that is built to withstand the force of the hurricanes that blow in from the Sea. This is Shaxxtar, and it is home to the rare and grim-faced Elgru, survivors of a once prosperous and advanced civilization.

At the mouth of the Sylbix River where it empties into the sea, the water is tumultuous and muddy. The storm surge is such that the Grand Delta was formed, splitting the river into many fingers as it forces its way into the sea, which in turn tries to force its way back upstream. Here there is a great shipping port, Meridia, home to many Men and Elgru, built to port ships and sailors brave enough to sail the stormy seas.

However, off the coast of Meridia is a vast graveyard of ships that wrecked while sailing into or out of port, for navigation is always treacherous and the storms are wild and unpredictable. This is Shipwreck Bay, and many a galley full of goods and gold lie at the bottom of its unforgiving waters.

Carved into the dark stone of the Shadowrocks is the mountain fortress of Ironness. Here there are Terrans that mine the mountains for precious gemstones and metals found no where else in the world.