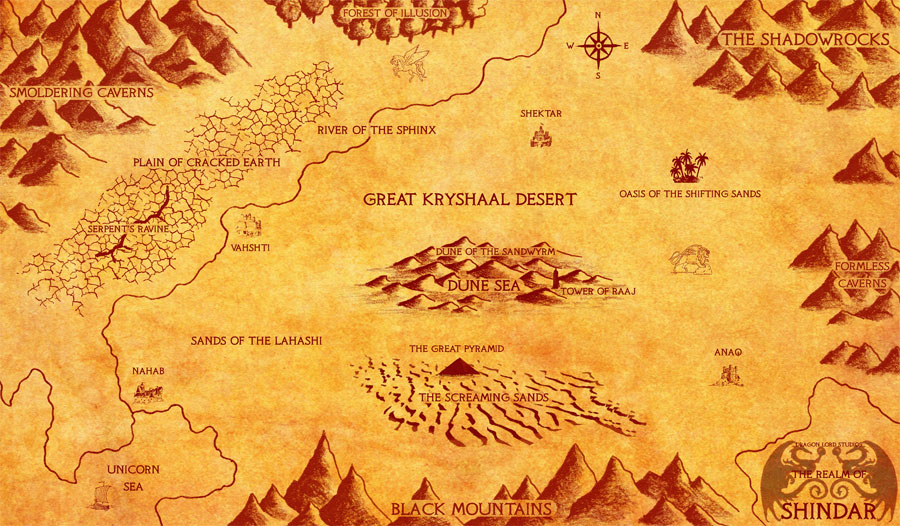 Shindar is a harsh, unforgiving realm of vast deserts and ancient civilizations.

Its main feature is the realm-encompassing Great Kryshaal Desert, home to desert-dwelling creatures and plants of every size and description. At its heart lies the Dune Sea that stretches in all directions much farther than can be reckoned. Buried beneath its endless dunes lies a slumbering Dragon of immense proportions, the Sand Dragon Saladyn, who sleeps as the ages go by but every so often wakes and brings terrible sandstorms down upon the unfortunate denizens of the desert.

To the south of the Dune Sea lie the Screaming Sands, so intensely hot that people, plants, and animals unsuited to the conditions simply cannot survive. Here there is the Great Pyramid, an ancient structure built by a lost civilization in ages long since forgotten, but within houses the slumbering spirit of the Fire Goddess Vesu, and in which dwells a Dragon of inconceivable beauty and power, Sorcha the Lumina Dragon who rises into the sky once a millennia and shines brighter than a thousand suns.

The western part of the desert is more hospitable to life than the interior and the east. There are few sources of water in the desert, but running through the north and west is the blessed River of the Sphinx, which provides some relief and fertility to an otherwise unbearable realm.

The Plains of the Lahashi are at some brief periods of the year green and fertile, host to a numerous population of the Lahashi, nomads and traders that live their lives of song and travel in these lands.

Still, to the west of the River of the Sphinx is a land where no plants have or will ever grow. This is the Plain of Cracked Earth, and no rain falls here nor does the water of the river to its east soak into its hard packed red clay. Great rifts and ravines split the cracked landscape, and in the deepest and widest one, known as the Serpent’s Ravine, dwells a solitary creature, Adamos the Dust Dragon. At times when the Dragon issues forth, great storms of red dust flow over the lands to the east, making life miserable for those who dwell in the already harsh lands.

In the eastern regions of the Great Kryshaal Desert, there is much barren space and the conditions to survive are difficult. However there are places where the endless sands are broken by the green and blue of a solitary oasis. There is one of particular importance, the Oasis of the Shifting Sands which, as its name implies, is difficult to pin down on a map for it is ever seemingly changing positions in the desert. Here there dwells the beautiful serpentine Mirage Dragon, Mallhach. Conflicting stories are told of this creature, some tell of the Dragon being beneficent and kind, helping lost travelers rest and recover in the waters of the oasis. Others tell of those who encountered the creature and were never seen or heard from again.

People who dwell in Shindar, mostly Drakkhan but quite a few desert Men, are by necessity strong and hardy. Life in the desert is anything but easy. Still, some centers of civilization still thrive although some are long since buried under the sands of time. Near the River of the Sphinx is the great multi-racial city of Vahshti. This is a prosperous place that sees pilgrims from all over trading and laughing in its stone streets.

To the south of Vahshti on the coast of the Unicorn Sea lies the port city of Nahab, whose wealth has grown great through trade and travel.

Out in the middle of the desert is the Drakkhan fortress city of Shektar. This place is a stronghold for a brutal desert sultan that rules an army of brigands and thieves.

Far to the east and south lies the ruins of Anaq, a city that was once glorious but lost long ago to a catastrophic war that left it buried beneath the sands. Though it is too large to have been completely buried and lost, it is largely uninhabited and its secrets unguarded for anyone brave and strong enough to venture there.

Out in the endless sand waves in the Dune Sea stands a solitary structure, the Tower of Raaj. It is said that high atop or deep within this tower are secrets and treasure of incalculable value, yet it is difficult to find, and no one has ever returned from an expedition to conquer it.