THE REALM OF ZOL 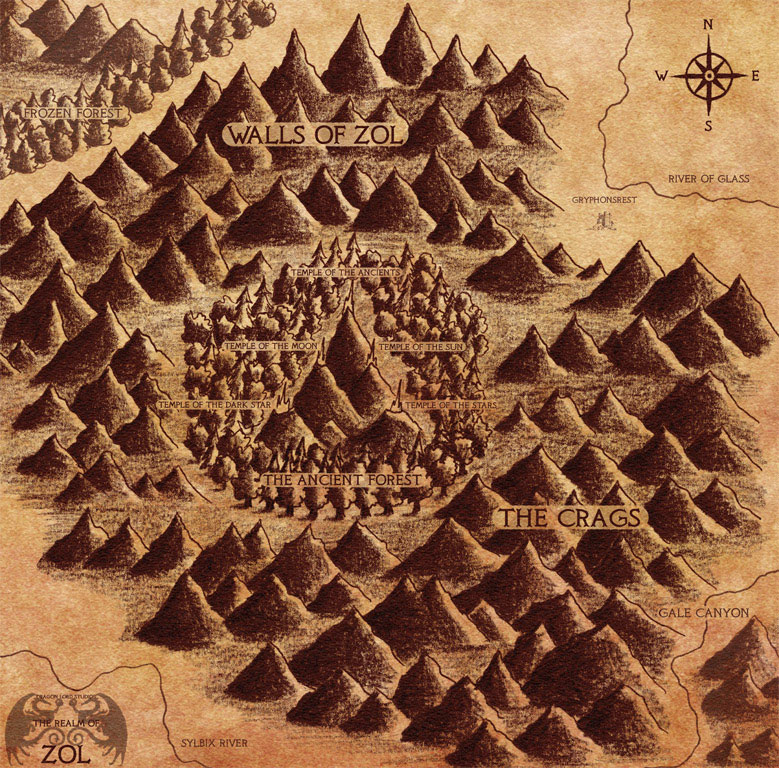 At the heart of the world lies the mysterious realm of Zol, which is ringed by impassible mountains and forests.

At its center lies powers and secrets that the world would not be able to exist without, and within it lies not only the source of the Great Cycle which brings night and day, but also the True Source that some say houses the very essence of the Creator…

Rising up out of The Ancient Forest which is filled with Fey and invincible guardians of indescribable type is the gigantic mountain of ZOL. On this mountain there are five ancient temples built by the Gods that house the Dragons of the Great Cycle.

In the Temple of the Sun rests the Solar Dragon Solros at the bottom of the Pool of Light, guarding the sleeping essence of the Goddess of Light, Zion. This fiery Dragon is awakened each day by the Song of Morning sung on the mountain of Westspire by the Twilight Dragon Eos. Rising in a ball of golden fire, the Dragon grasps Sol, the great crystal orb that rests on the Altar of the Sun with his long, flaming tail. The orb is submerged in the Pool of Light and is instantly filled with glorious golden light. Rising toward the heavens, the Dragon exits the Temple via the Oculus of the Sun and flies high into the sky. His journey throughout the day is long and laborious.

Though the light from Sol shines everywhere in the world but the dark realm of Savatar which blocks it out, it is brightest and hottest nearest to where the Dragon flies. When the day is new the Dragon flies over the desert realm of Shindar where the blazing light from the sun makes the heat of day nearly unbearable. As the day goes on, the Dragon flies higher and the light in the orb becomes far less intense. By the time the Dragon flies northwest over Astalon, Aracardia, Laurenestia and Iraldion, the heat from the orb cools significantly. The Dragon makes his descent over the Veldt as day wears on, and though Sol shines less brightly it is closer to the earth and its warm rays still make Iraldion a temperate realm.

By the time Solros approaches Westspire, the light within Sol has been mostly spent, and the light within changes from a golden yellow to a deep rosy violet. As the Dragon passes over Westspire, the softly glowing Sol is transferred from the fiery tail of Solros to the outstretched claws of Eos, who takes it down within the mountain where its light goes out. Solros plunges headfirst into the Great Lexicon Ocean just beyond the Sunwashed Isles, and his great fire is extinguished and the day ends. How the Dragon and the orb return to the Temple of the Sun at night to rise again on the following day is a mystery that modern day people cannot discern.

It is said that the Ancients knew how the cycle was completed but the answer has been lost along with the people that knew.

In the Temple of the Moon rests the slumbering spirit of the Shadow Goddess Zora, as well as the immense Lunar Dragon Luna in the Pool of Shadows. Each night, in the realm of Savatar the Dark Dragon Thanlume alights atop Eastspire and sings the Song of Evening. Luna awakes to this song and rises from slumber, grasping the Lamp of the Shadows, Na’Lune in his great long tail and submerging it into the Pool of Shadows where it fills with the magical light and glows softly from within. Rising into the heavens, the glow from the Moon bathes all the realms in its illuminating light, allowing the creatures that live in the realms to see even when the Sun is not in the sky.

Luna flies much more slowly than Solros, for the Lamp of the Shadows is much larger and heavier than Sol, but the Dragon does not fly nearly so far. In a great arcing southerly loop the Dragon swoops over the southern realms and returns toward ZOL as he begins to tire. Near the end of his flight he dips down very low over the realm of Savatar, where the Moon shines so brightly that it would appear to be daytime if the Sun were shedding blue light instead of golden.

When Luna passes over Eastspire, Na’Lune is transferred from his great tail into the waiting claws of Thanlume the Dark Dragon, who takes the orb deep under the mountain to places no one knows. As Luna flies back to ZOL to sleep, the night is illuminated only by the stars. This is the time of Deepnight, and though it lasts but briefly there is great significance – some good, some bad - placed on it by the people and creatures of Elcriss.

Like in the cycle of the sun, no one knows where Thanlume takes the Lamp of the Shadows or how it reappears in the Temple of the Moon to rise again the next night.

In the Temple of the Stars lies an ancient, powerful guardian. This is Asterion the Star Dragon, who guards the sleeping essence of the Star Goddess Vega. During Deepnight this Dragon takes to flight through the heavens and visits the stars that shine there, telling them of all that has transpired in the world on the day that has just passed. In this way the history of Time is chronicled in the Stars, which each house a remnant of the slumbering spirit of the Creator. At the End of Days when the stars shine as one, these stories will be brought together and the completed history of the realms immortalized in the heart and mind of God.

The Temple of the Dark Star holds a terrible guardian. This is Phobos the Eclipse Dragon. Though he slumbers for great periods of time, when he wakens terrible things have been known to happen. The Eclipse Dragon greatly covets the crystal orbs Sol and Na’Lune. Whether the Dragon awakens during the day or at night, he will rise up and battle with the Guardian that is currently in the sky, disrupting the cycle and blotting out the light that shines from the orb that Dragon carries! If Phobos is successfully driven off, the length of the eclipse will be generally short-lived. But on several occasions Phobos has managed to get hold of and even at times has devoured the orb, and then darkness reigns until he can be successfully driven away or forced to give up the relic he hoards and forced back into slumber in the Tomb of Prophecies.

There have been very dark times in the past ages of Elcriss while this Dragon hoarded the Light and / or the Shadow. Yet out of the darkness there have come times of change that in the end benefited the world as a whole. Even strife has its place in the Great Cycle, it seems…

The Temple of the Ancients stands atop the great peak at the pinnacle of ZOL. Here in this holy place there is a Great Guardian that rules over all other Dragons of the realms. This is the Prism Dragon, OMNIS. This glorious creature does not leave the Temple of the Ancients for any reason, for within it he is the guardian of the most holy relic that has and ever will exist.

When the One God AOZ divided into the vessels that became the gods and goddesses, the core of his essence, the very Heart of God stayed behind. This entered a Star Crystal that was to be sealed away deep in the center of the world until the Last Day when all that had been divided comes back into One.

The treachery of the Chaos Lord Nazu led to the War of Dragons that tore the realms asunder. During this time, the crystal vessel that housed the Heart of AOZ was disturbed and forced to the surface of the world. Here at this spot was where it surfaced. The Dragon OMNIS is one with the crystal and one with the EverLord. He will watch over this crystal until the End of Time as its guardian here in the very heart of the world.