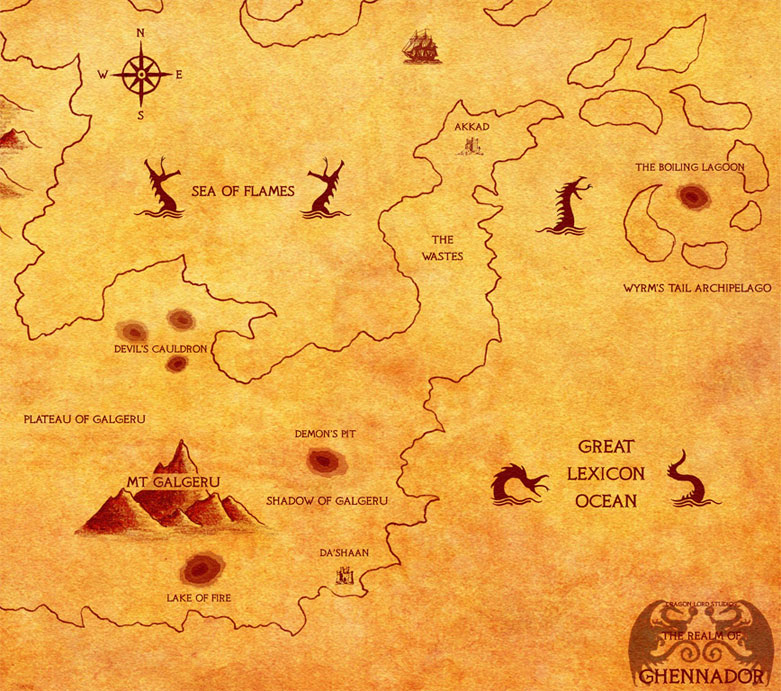 The realm of Ghennador is a hot, blasted wasteland of sand, rock, steam, and magma.

The whole realm is in constant flux from the geothermal activity that is on display here. At its heart lies its one constant, the looming silhouette of the infernal Mt. Galgeru – the world’s largest and most active volcano. Galgeru, which houses the sleeping spirit of the Lava God Xorl within it, is so vast that it has formed its own gigantic ecosystem, from the plateau it rises up off of to the dark lands that lie in its shadow to the south and east.

Inside of the titanic volcano is the Crater of Doom, wherein lairs the terrible Pyroclastic Dragon Aghamor. Spilling from the sides of the volcano, lava pools in the great Lake of Fire at the foot of the mountain, where the great serpent Vorax the Lava Dragon makes his blazing lair.

Out on the Plateau of Galgeru the hot springs, geysers and sulfurous pools turn the landscape into a boiling, seething mass. The very air becomes toxic to normal creatures and deadly to people here.

Near the Sea of Flames to the north the plateau becomes the Devil’s Cauldron, a place where the incredible power of nature is displayed. Here the Steam Dragon Skalla dwells within the poisonous, bubbling pools.

Further to the east, the high place that Mt. Galgeru springs forth from drops down into a deep dark basin. This is the Shadow of Galgeru. Here the stifling air is so hot that it scorches the lungs of any who breathe it. The flows from Galgeru run down into black tarry masses here that stay in semisolid state of black magma, and a great pool of it known as the Demon’s Pit roils at the bottom of the basin. Here there dwells a monstrous Slag Dragon, Angharad, whose power and fury have been known to turn everything around him into a melted ruin in the blink of an eye.

Further north of the Shadow of Galgeru lies a barren land known as The Wastes. Here there is no sustainable life or food for anything to live off of. It is a completely broken and tortured landscape for which there is no relief in sight.

The creatures that live in these regions are quite bizarre indeed. To adapt to conditions such as these requires extraordinary features that are not easily passed on from generation to generation. Still there are people that live in this realm too, though they are not recognizable to people from the northern realms as such. They have great serpentine bodies and muscular torsos, with hard black armor plating in place of skin. These people are the Val’Zeru, and they have great strongholds in Da’Shaan and Akkad.

In the Sea of Flames that Ghennador rises out of there is a chain of islands to the east known as the Wyrm’s Tail Archipelago. This chain of islands has been formed by the volcanic activity under the sea in the region of the Boiling Lagoon, which is the dwelling place of a giant Basalt Dragon, Zagros. Here the sea is so hot that the water is constantly churning and boiling, and only the strangest and strongest of sea creatures are able to withstand the conditions here in the sea.