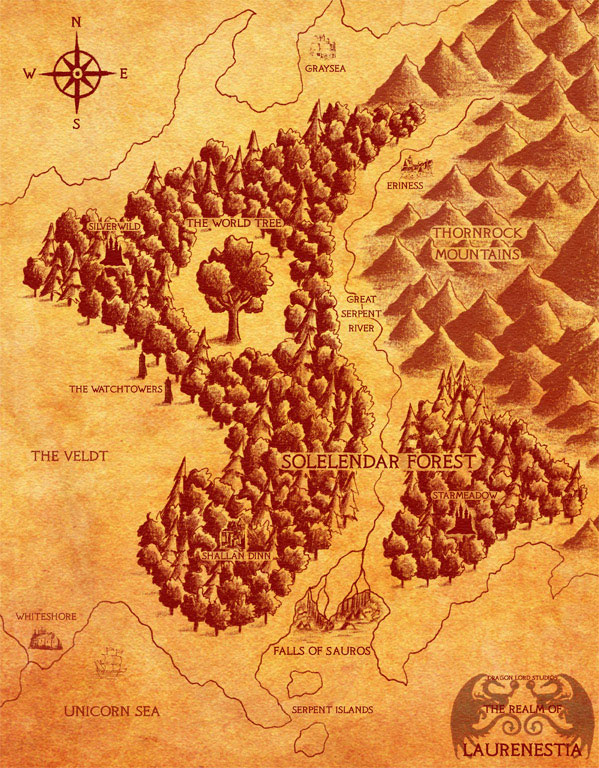 The realm of Laurenestia is one of deep forests and pristine rivers, lakes and streams. A majority of this land is covered by the Solelendar Forest, which is by far the largest in the world.

At the heart of the Solelendar Forest lies the realm-sustaining World Tree, which is an immense, ancient tree hundreds of feet tall whose roots are said to grow down into the very deepest depths of the earth. Within the Tree is the sleeping essence of the Forest God ORZA, which keeps the whole of the realm green, lush, and eternally vibrant.

Though the forest itself is the main feature of this realm, not to be overlooked are the myriad of pristine rivers and streams that flow through it. The greatest of these is the Great Serpent River, which is the lifeblood of the forest and the eventual destination of all the water which flows from the rivers, streams, lakes and pools within it. The Serpent River flows lazily from its source in the Thornrock Mountains to the north down to its spectacular entrance into the Unicorn Sea via the Falls of Sauros. This awesome multi-cascade waterfall complex drops thousands of feet from the delta of the river off of the Roaring Cliffs and into the Sea, where the fresh water mingles with the salt of the sea as it flows out past the Serpent Isles, making the environment in the water here favorable for some very unique and rare species to live.

There are great watery caverns in the cliffs at the base of the Falls in which the River Dragon Lazuli makes his lair, though the Dragon often leaves this home to climb the cliffs and swim the length of the Great Serpent River itself.

The people who live in the realm of Laurenestia are mostly Sylvaan, though many Fey can be found here among the trees as well. Those who enter the forest come under not only the watch of the Dragon but also under the watch of these ancient people who are as fiercely protective of the forest as is the Dragon of the World Tree. The Sylvaan have many small dwelling places throughout the forest but also have a few strongholds built in and among the great ancient trees. These include the Sylvaan capitol Shallan Dinn, the magical city of Starmeadow and the remote stronghold of SilverWild.

Adding to the vigilant guard placed on the forest and the tree are the huge structures known simply at The Watchtowers which rise up at the westernmost edge of the forest which the Sylvaan use to keep a lookout over the land of Iraldion to the west.

On the eastern edge outside of the great forest is the city of Eriness. Here Sylvaan often come together with Terrans from the Thornrock Mountains and Men from Astalon for trade and friendship. It is decreed that non-Sylvaan entering the forest without first gaining permission through Eriness are declared outlaws and dealt with accordingly if discovered.

To the north of the forest is the ship-town of Greysea. Here there are Sylvaan said to be the descendents of the Sylvaan of Tyrolia in the north who disappeared in ages past. These possible descendants have built a great shipyard for sailing on the Sea of Frost and have become adept at the construction of ice-breaking ships to aid in navigating the dangerous waters.