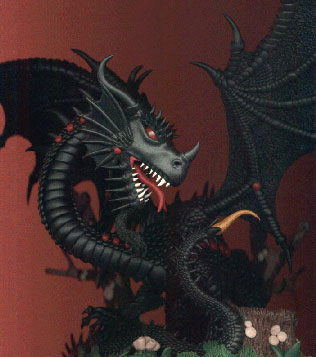 This Dragon sculpture is the origin of a long journey for me. Black Dragons have always been near the top of my list of favorites, but the way they look in my head was almost impossible for me to accurately sculpt for a very long time. This Dragon was my first attempt at Moramarth the Black, and even as an early representation I am still very proud of it - I wish I had taken more photographs of this piece when it was completed, but as can be seen from my other earlier work, I was not very studious when it came to documenting my sculptures, which is something I regret.

From incarnation to incarnation, this Dragon continued to evolve, as you can see in the 2001 version shown on this site and finally in the glorious 2005 incarnation, which I'm sure will stand as one of my greatest pieces of all time.

This piece was made as a gift for a friend from her parents in 2000, and was not replicated.