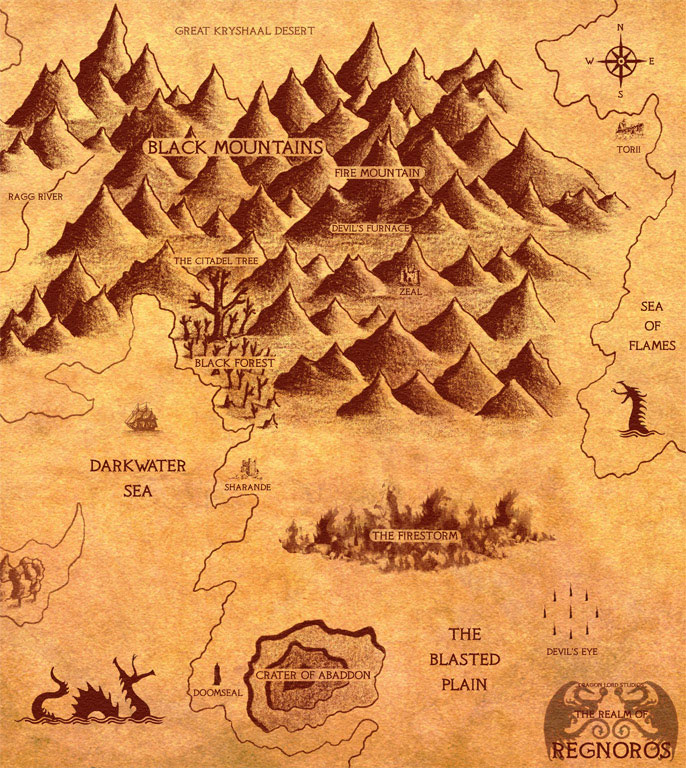 The fiery realm of Regnoros is a harsh, unforgiving realm.

The giant range of the volcanic Black Mountains dominates the north, while in the south lies The Blasted Plain of scorched earth, rock and sand that holds little in the way of sustainable life.

The Firestorm, a eternally blazing maelstrom with an infernal source scorches the heart of this plain.

To the west lies the Black Forest, a forest of obsidian trees, charred to black stumps and towering dark trunks by the constant volcanic activity from the blazing mountains.

In the heart of the Black Mountains burn uncontrollable flames that blaze forth from the titanic Fire Mountain. Deep within this volcano is a pit known as the Devil’s Furnace in which rages Valruin, a great Fire Dragon.

The mountains here seethe with fiery fury, so much so that they shimmer from a distance from the waves of heat they give off.

To the south and east of this place is the remnant of a once mighty forest. It grew here before War of the Dragons and was deep and dark and wet. As the mountains ignited into fire during the War, so too did the forest, and great gouts of smoke from the burning trees poured out over the realms. In these ancient times there was a tree in this forest that was nearly as large as the World Tree of Laurenestia. This was the Citadel Tree and it was a watchtower over the southern realms of the world back in the ages when the south was as green and lush as Laurenestia is today. After the flames died down and the smoke cleared, all that remained of the now Black Forest were obsidian trunks and stumps, and a Dragon was seen sitting on the charred remnants of the Citadel Tree. This is Jarlath, the Smoke Dragon. He dwells within the obsidian tree still, and delights in fire and smoke and destruction.

Out on the Blasted Plain south of the Black Mountains burns an unquenchable firestorm. There is a Flare Dragon dwelling at the heart of this storm named Ardashyr. The source of the fire are great tar and oil pits that were ignited when the Dragon came to dwell in this place, and he revels in the eternal fires that burn here hot enough to melt iron.

South on the Blasted Plain on the shore of the Darkwater Sea is a terrible wound upon the face of the world. Here something fell from the sky, but it wasn’t a star. The Crater of Abaddon is the remnant of a cataclysm that befell the world when, during the War of the Dragons the Meteor Dragon Sephirus fell from the heavens and struck the ground with shattering force. The ground was blasted and hollowed out for leagues around the impact, and darkness fell over the whole world. The last remaining Ancients that survived pooled their strength and created the Doomseal in an obsidian obelisk on the rim of the crater that sealed the now slumbering Dragon deep within the earth at its center, so he cannot rise again to injure the world another time so long as the seal remains intact.

East of the Crater of Abaddon is a ring of red standing stones that look like petrified flames. This is known as the Devil’s Eye. Only the Ancients know what these rune stones were made for, and they have stood silent and lonely through the ages since the Ancients disappeared from the world.

There are countless fiery creatures that live in the realm of Regnoros. Of people there are also many, since both Drakkhan and Val’Zeru revel in conditions such as this. Their scaly skin protects them from many of the hazards that come from living in such a terrible place. The Val’Zeru have a fortress called Zeal deep within the Black Mountains where they hunt other creatures and worship fire. A place to find large populations reptilian Drakkhan is south of the Black Forest on the coast of the Darkwater Sea in the fiery kingdom of Sharande.

Where large populations of Men will be found within Regnoros is in the northern reaches in the city of Torii by the Sea of Flames. This is a lawless port town of thieves, pirates and mercenaries that have found a place far from civilization to escape punishment for their crimes. It is a hard life to be sure, but preferable to prison or the gallows.