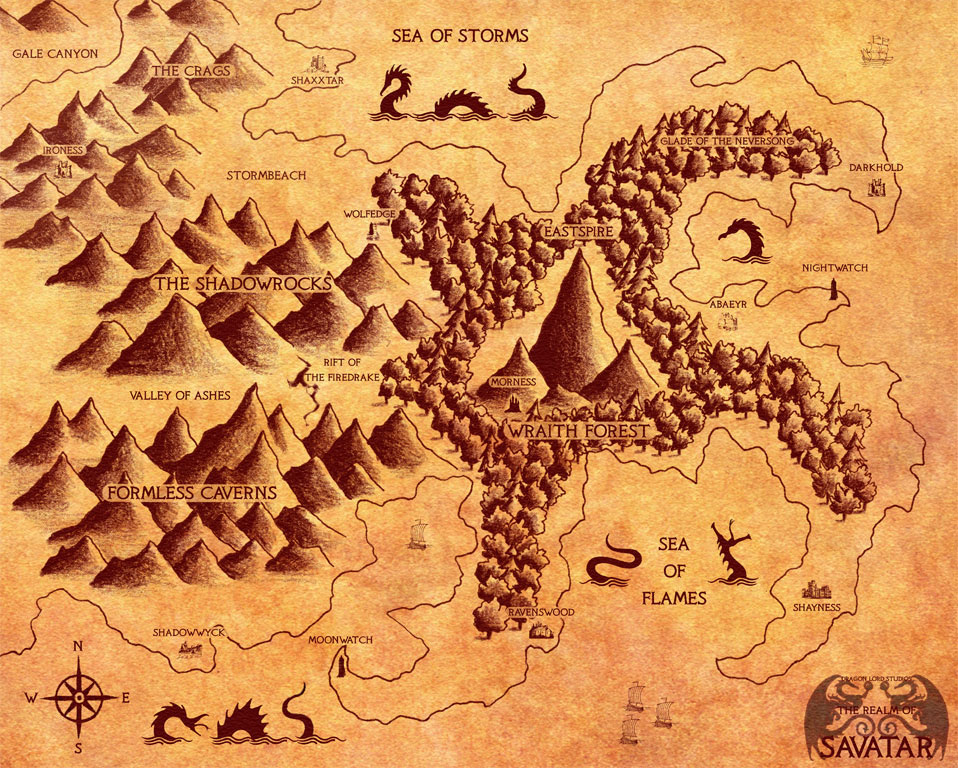 The dark realm of Savatar is a land of eternal shadow.

The sun never shines here during the day, and the moon hangs low in the sky every night. The creatures, plants, and people that live here are quite adapted to this way of life, though, and indeed many of them would not be able to survive if the sun ever shone here at all.

Covering a majority of this dark land is the Wraith Forest. The forest is home to many creatures of the night, and is said to be haunted. In the northeast there is a clearing in the trees where no sounds can be heard and even the light of the moon is subdued. This is the Glade of the Neversong, and deep within it there lies a silent and ever-watchful guardian, the Vapor Dragon Schalass, whose breath turns those it touches to spectral, wandering wraiths left to forever roam the shadowy forest.

Rising up from the forest floor in the center of the realm is a high solitary peak that is surrounded by flights of bats and the call of wolves. This place is Eastspire. This is the dwelling of the of the Dark Dragon Thanlume, one of the Dragons of the Great Cycle that brings night and day to Elcriss.

Though the light of the Sun never touches these realms through the power of the Shadow magic that rules over all here, the light of the Moon is welcomed by those that live here. Each night, Thanlume alights atop Eastspire and howls the Song of Evening to the West. From the Realm of Zol the Lunar Dragon Luna hears this call and flies into the sky holding Na’Lune, the Lamp of the Shadows – the moon – in his great long tail. Slowly he swoops over the realms in a great arc that culminates in flying low over the land of Savatar, where he moon is huge and bright in the sky, and Na’Lune is delivered to Thanlume at the peak of Eastspire – the Dragon takes the orb deep underground to places no one knows, and Luna returns to rest again in the Temple of the Moon in the realm of Zol.

In western Savatar rise the Shadowrocks and the Formless Caverns. Between these ranges the Valley of Ashes opens deep and dark, and its floor is thick with the black, burned ash from the realm of Regnoros to the southwest. Here there is a great crack opened in the floor of the valley, the Rift of the Firedrake, in which dwells a ferocious dark fiend, the Ash Dragon Charlock. This Dragon jealously guards the passageway of this valley and is extremely hostile and dangerous.

Though there are many dangers in this dark land where night creatures dwell, there are a surprisingly high number of cities and large population of people that live here. This is because the race of people that predominately lives here are Changelings, beings that resemble Men but have the ability to transform into animals using the power of the light of the moon.

The capitol city of the Changelings is the city of Morness that lies directly at the foot of Westspire in a clearing of the Wraith Forest. It is a beautiful city of spires and cathedrals, and the dark castle here is built of onyx and stained glass that glows in the light of the moon. There are many other dark cities here, including Abaeyr on the edge of the forest where the Shadow Sylvaan live, and Shayness, Ravenswood and Shadowwyck which are port cities that build beautiful black ships to sail the dangerous seas.

On the western side of the Wraith Forest lies Wolfedge, an outpost that watches the realms to the north to warn against intruders attempting to enter the forest.

To the east lies the imposing fortress of Darkhold, a kingdom independent of others in the realm made of black granite and marble, which houses a dark lord on a dark throne…

There are towers that rise up on the peninsulas of Savatar that look out over the seas. These are Nightwatch and Moonwatch. Though they are used as waypoints on the sea which shine beacons out over the dark waters, they are remnants from ancient times that are emblazoned with black runes that hold a long-lost magic.