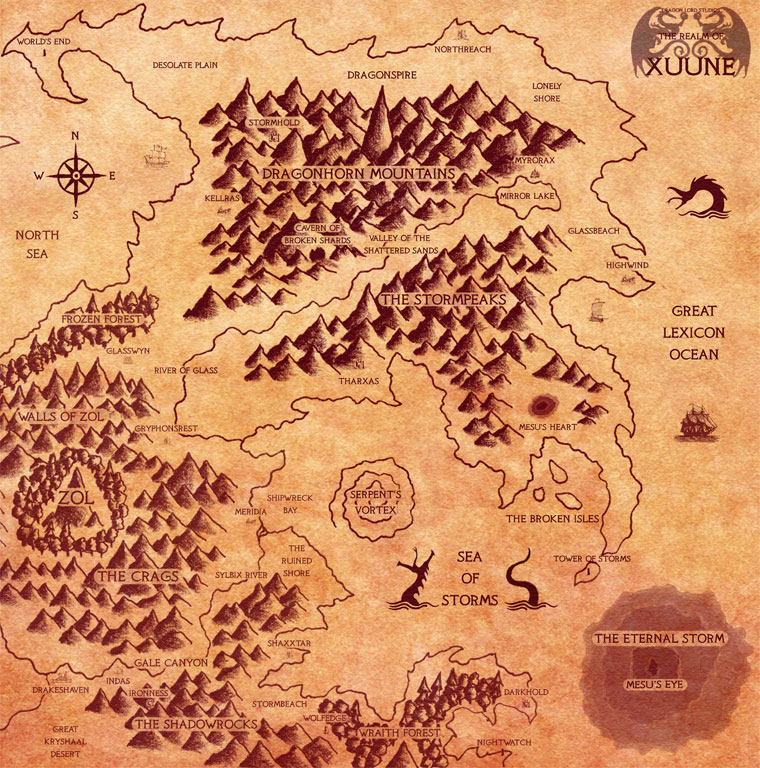 The land of Xuune is harsh and cruel.

It is dominated by high spiky mountains and powerful, terrible storms. The mountain ranges that dominate the landscape here are the Dragonhorn Mountains and The Stormpeaks.

Towering over the high sharp peaks is a spike of dark rock called Dragonspire. It is here that the Storm Dragon Tarannus makes his lair. Lightning from terrible black clouds constantly strikes the top of this peak where the Dragon dwells, which is the dwelling-place of the sleeping essence of the Thunder God Mesu.

Dividing the Dragonhorns from the Stormpeaks is a wide, windy canyon. This is the Valley of the Shattered Sands. Here the land is blasted and ruined, and the sandy ground is littered with fulgurites from the wicked lightning that constantly rains down among the cracked and shattered rocks. Living in this valley and lairing in the yawning Cavern of Broken Shards is the monstrous Glass Dragon, Agahar.

Flowing through this canyon are the crystal waters of the River of Glass, which find their origin in Mirror Lake to the northeast.

To the south, on the edge of the Stormpeaks is Mesu’s Heart, a crater that descends many miles into the storm-beaten ground. Here a Dragon sleeps that is best left undisturbed. This is the Force Dragon Argravon, who is said to be slumbering until the Last Battle at the End of Days. Argravon is an immense, powerful creature whose electromagnetic waves tear the very rocks around him asunder.

The Sea of Storms works in conjunction with the realm of Xuune in generating the most powerful storms in the world. Far from shore is the Serpent’s Vortex, which is a miles-wide whirlpool that sends many unfortunate sailors to the bottom of the sea. Here lairs a serpentine Tempest Dragon, Maelstrom, the bane of sailors and scourge of the Sea of Storms.

Farther out to sea is a creature that thankfully does not stray inland very often. One of the most powerful Dragons in the world, the Plasma Dragon Raziel rages in The Eternal Storm off the eastern coast of Elcriss. When this Dragon wakens and comes to shore, he brings the terrible cyclone that is his lair with him, and punishes the realms with wind and rain and fiery bolts of lightning. It has been said that the mad wizard who lives in the Tower of Storms in the Broken Isles holds sway over this creature, but no one has ever gotten close enough to confirm this...

In the northern regions of Xuune, the land is bleak and empty. Nothing but rocks and sand stretch for miles on the Lonely Shore and the Desolate Plain. Yet there are Gargans that have migrated here and established kingdoms in this place; for though the weather is bad, underneath the mountains there is a wealth of precious resources to be had, and the giants delight in the lightning that cracks the sky.

The sprawling kingdom of Myrorax sits on the shore of Mirror Lake here, protected somewhat from the winds in the mountains by its proximity to natural features in the mountain walls that make a strong barrier to the raging storms here. There are even times in this region that the waters of Mirror Lake are in fact still and reflective as glass.

South of Myrorax is a kingdom that tells a different story. On the sands of Glassbeach rises the city of Highwind. Here the winds from the Sea of Storms blow in great gales that power Gargan-made, gigantic ships that are the stoutest in the world.

Far to the north lies the ruined kingdom of Northreach. This abandoned fortress used to house a prosperous kingdom until it was destroyed in the War of the Dragons in ancient times. Said to be haunted and cursed, it was never rebuilt.

To the southwest of this place in the heart of the Dragonhorns is the fortified kingdom of Stormhold, built by Terrans to mine the wealth of adamantium ore that can be found in the mountains here. This is in turn transported to Kellras, to be forged by the finest blacksmiths in the realm.

South of this place is the kingdom of Tharxas. The caverns that make up this kingdom live a race of Gargans who rule the entire region of the Stormpeaks and make travel through them very dangerous.

Far to the west, on the edge of the realm is the great kingdom of Gryphonsrest. The Men that live here have tamed the great feathered beasts of the region which serve as steeds and companions to those that dwell here.

Far to the north a monolith springs up in stark contrast to the lonely plain it rises from. This region is called the World’s End. A reason for the rune-covered monolith’s existence cannot be discerned.