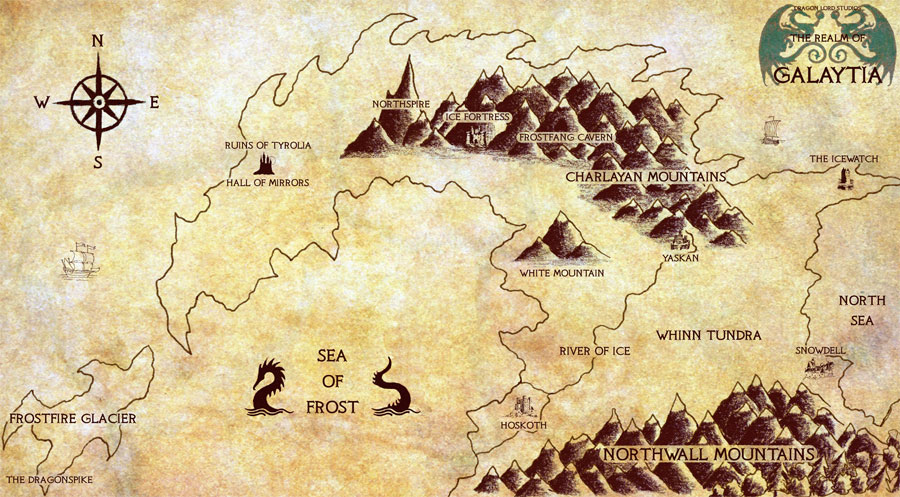 The icy realm of Galaytia lies at the northern extreme of the world.

Here in this white realm no plants grow, but giant mountains of ice break up the barren landscape in austere beauty. These are the Charlayan Mountains, formed by the raging of the Ice God Shia when the world was new. These ancient mountains have remained unchanged for eons, and at their heart is a huge system of subterranean caves known as the Frostfang Caverns. Here an immense Ice Dragon, Aurarathor the FrostWyrm, makes his lair and guards the slumbering spirit of the Ice God Shia. There are numerous holes in the ceiling of these caverns that allow the softly glowing light and the snow from outside in, which makes all the ice-coated surfaces gleam like crystal and diamonds.

Even here in these mountains Wolfen dared to make a mountain keep – the Ice Fortress is the structure that houses them in the northern Charlayan Mountains. Ever at odds with the Dragon of the Frostfang Caverns, the Wolfen tend to keep their business south and east of these caves to stay away from the Dragon’s wrath.

On the western edge of the Charlayan Mountains rises Northspire, largest of the peaks of this range. Here a Dragon of incredible power sleeps through the ages to awake in glory after decades or centuries have gone by. This is the Comet Dragon Zahiliya, who streaks across the sky leaving a sparkling icy trail in his wake that can be seen across the entirety of the world. His stirring is often a sign that great change or upheaval may be about to take place, so even in spite of his dazzling beauty many people greatly fear the coming of this Dragon and what it may mean for the near future.

West of Northspire on the vast sheets of ice that form the remainder of the realm of Galaytia lie the ruins of one of the world’s greatest lost civilizations. Here the once spiraling towers of the Ice Sylvaan of Tyrolia lie strewn about the ground, as forgotten as the great race of Sylvaan that created them in ages long ago. But among the ruins lie one of the wonders of the world that is not thrown down and destroyed. In the Hall of Mirrors lairs the Mirror Dragon, Zophar. It is said that this magnificent creature holds all the secrets of the civilization that was destroyed in the spot he dwells, though what part if any the Dragon himself had to play in that story no one can say.

To the west and south of the realm lies the Sea of Frost. In it floats a gargantuan iceberg called the Frostfire Glacier that seems frozen to the roots of the earth itself. On an arm of this floe called the Dragonspike lairs a Glacier Dragon, Strybog. This creature is one of the world’s largest Dragons. It is said that he can turn all the sea to ice for miles around him and destroy it in earth shaking roars in the blink of an eye. This is one of the main reasons that sailing on the Sea of Frost is so dangerous.